The "iconic" Dom of Cologne

I had never been, but had wanted to go ever since my beloved graduate school song-and-accompanying teacher first spoke about the “Dom” which Heine mentions in Buch der Lieder, and then in turn, what Schumann appropriates into Dichterliebe.

On the mission was of course to explore the Dom (cathedral), one of the largest in the world. Heine writes,

(In the Rhine, in the beautiful river,
which wrap itself in waves,
with its enormous cathedral,
the great, holy Cologne.).

The text goes on to compare the object of the “protagonist’s” affection to an icon within the church, of the Virgin Mary. 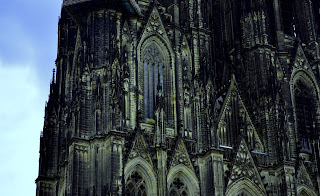 This photo is of the exterior.

When I went inside (I remember it raining that day a little), I figured that the Heine-Schumann icon would be incredibly obvious. Alas, it was not! There were several “contenders.” I’m going to ruminate over the photos I took and see if I can surmise which icon it is.
Posted by Kristin Ditlow at 11:00 AM